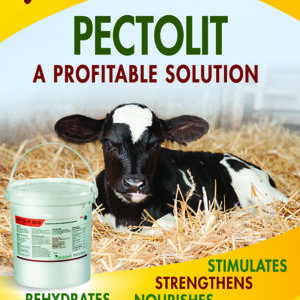 Antidiarrheals
PECTOLIT 2010
PECTOLIT 2010 was developed to prevent and combat digestive problems in calves, lambs and kid goats.   Pectolit absorbs toxins, protects gut epithelial cells and slows down gut peristaltic movement. In addition, Pectolit provides glucose, electrolytes, vitamins and vital minerals to promote physiological functions. It is well known that many calves die from starvation when suffering from diarreah. Stoping the diarreah alone is not enough, Pectolit contains available proteins and fats in order to actually feed the calf and prevent body weight loss. Pectolit is tasty and consumed eagerly, even by weak calves.

PECTOFEED was created on October 1st, 2013.
Our objective is to bring effective solutions to breeders.
Our strategy is based on the marketing of some products only, in order to give all the satisfaction we can to breeders.

Sign up for our newsletter to stay informed about our products.

Use this form to find things you need on this site

No products in the cart.